We take pride in our roots 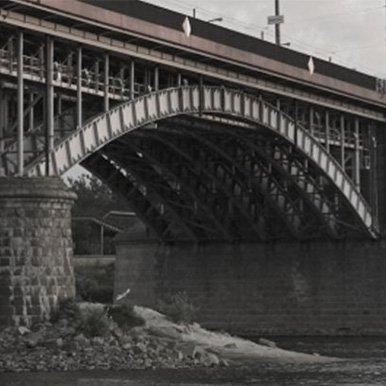 The act of incorporation of the Company for the Construction of Bridges and Steel Structure Mostostal [Przedsiębiorstwa Budowy Mostów i Konstrukcji Stalowych Mostostal] – which was the first name of the Company – was drawn up on 28 May 1945, only three weeks after the end of the World War II. Initially, the company was based in Krakow (at that time, Warsaw was completely devastated); however, Mostostal was connected with the capital from the very beginning. The first task for the newly established company was rebuilding of the important Warsaw thoroughfare the Prince Józef Poniatowski Bridge. Work started at the end of July and beginning of August 1945, and the bridge was put into operation only 12 months later on 22 July 1946. In subsequent years, Mostostal built hundreds of bridges over most of main Polish rivers, including most Warsaw’s bridges. In 1951, the company moved to Warsaw permanently and the scope of company’s operation was extended to industrial and energy construction works and all types of large-sized and specialist steel structures. It is impossible to list all of the investments; however, it is enough to say that Mostostal employees were present at all of the most important construction sites in the country and on many sites abroad.

The bridge’s name is a tribute to the miners and steelworkers from the Silesia and Zagłębie Dąbrowskie regions for their participation in the rebuilding of destroyed Warsaw. The bridge was designed by Jerzy Koziełek and is an integral part of Trasa W-Z (East-West Route), which connected Praga with Śródmieście and Wola on 22 July, 1948. 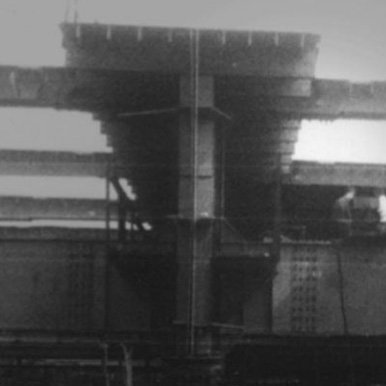 The bridge was constructed according to design of Janusz Ratyński. It was an element of the Stefan Starzyński Bridge Route and was constructed on the pillars of the bridge that had been blown up by the Germans on 13 September 1944 and that had been the first rail and road bridge (then only road bridge) built in 1873-1875 next to the Citadel.The two-level bridge concept was recreated. 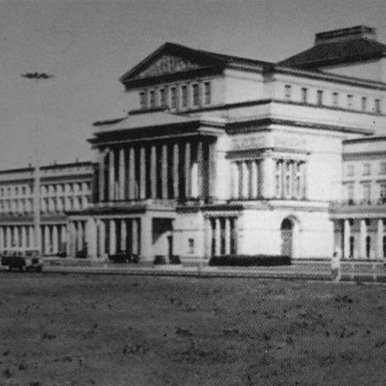 The present location of the Grand Theatre used to be where the Marywil commercial centre and hotel was situated. Marywil was demolished in the 1930s and in 1825-1833 the theatre was built in its place based on a design by Antonio Corazzi.In September 1939, the building was bombed and largely consumed by fire.

After WW II, the theatre was rebuilt in the historicising socialist realism style and it was extended (by the design of Bohdan Pniewski under the supervision of Arnold Szyfman) with funds from the Social Fund for Rebuilding the Capital. As a result it was the most developed and best-equipped opera theatre in the world. On 19 November 1965, the opening ceremony of the rebuilt Grand Theatre took place. At the beginning of the 21st century, Mostostal Warsaw also constructed the sculpture of Apollo that decorates the theatre’s front façade. 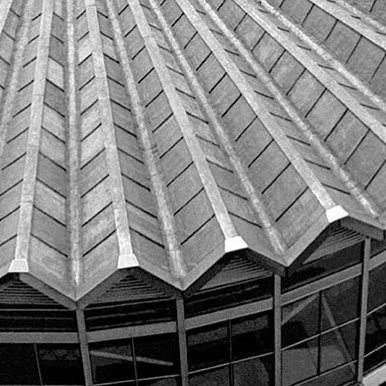 The Rotunda Building is a part of the Eastern Wall, which was built by Mostostal Warsaw (Domy Towarowe Centrum and first Warsaw high-rises) in 1960-1969. The building was designed by Jerzy Jakubowicz. On 15 February 1979, 70% of the Rotunda building was destroyed as a result of gas explosion causing the deaths of 49 people and 110 people injured. Reconstruction was carried out very quickly – the Rotunda building was once again put in operation at the end of October 1979. One of the main changes compared to the original building was the use of dimmed glass for the façade. 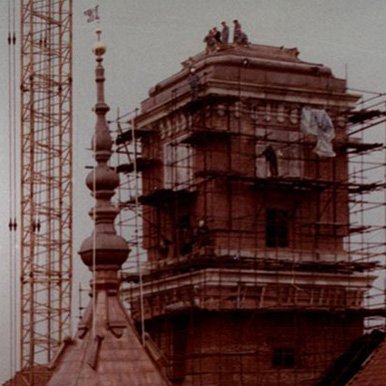 In September 1939, the castle burnt down after German bombing and on 4 October 1939 in Berlin, Adolf Hitler ordered that the castle be blown up; however, the final destruction of the building took place during the Warsaw Uprising between 8 and 13 September 1944. After the destruction from 1944, the only elements to survive were the basements, the lower part of Grodzka Tower, elements of the Royal Library and the Kubicki Arcades. The decision to rebuild the castle was taken by the Sejm on 20 January 1971. Afterwards, the Civic Committee for the Reconstruction of the Royal Castle in Warsaw was established. By July 1974, the castle was reconstructed as a building shell (the plan was to  restore it to its condition from before 1939 and recreate elements that were eliminated during earlier reconstructions). 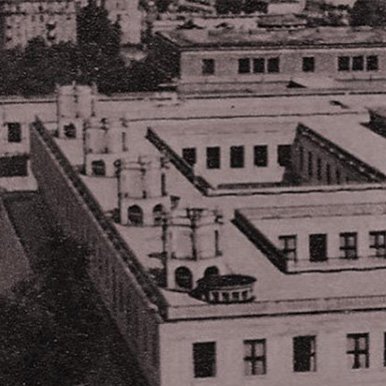 The Polish Parliament complex – a set of buildings located in Warsaw at 4/6/8 Wiejska Street, used by the Sejm and Senate of the Republic of Poland. The complex construction started after the re-establishment of Polish independence in 1918. All the structures located within the complex together with the gardens are managed by the Chancellery of the Sejm. Mostostal Warsaw modernised the Assembly Room, disassembled the roof and replaced it with a new roof structure. 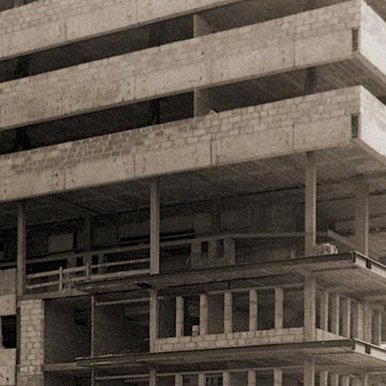 The institute is a scientific and R&D centre for the Ministry of Health, which also operates as a hospital and at the same time is a monument for the child victims of WWII.

It is known as the most modern children’s hospital in Poland and provides medical, rehabilitation, scientific and teaching services. It consists of 17 wards, 29 independent clinics, a hospital pharmacy and a complex of disease-specific out-patient clinics. 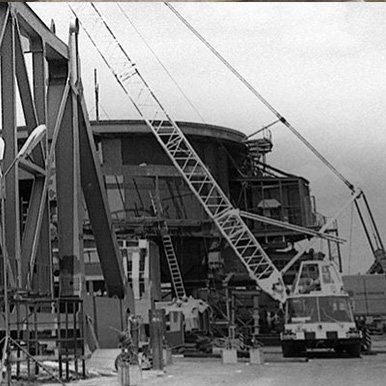 The first plans for the bridge were made in the 1960s, according to which it was to be suspended on two pylons. The design was changed due to the high costs of construction. However, the initial design of the bridge was implemented but on a smaller scale as a footbridge over the Wkra river in Pomiechówek next to Goławice. The final project was developed by the Stolica design office engineers under the supervision of Witold Witkowski. 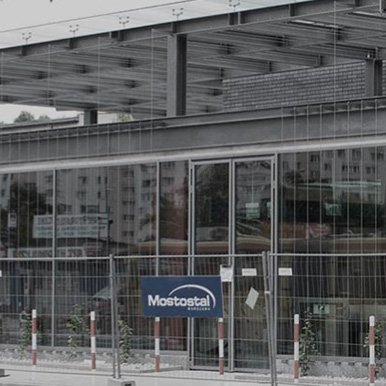 On 15 April 1983, the first steel pile was hammered into the ground at the tunnel construction site in the Ursynów district. This date is regarded as the starting point of the construction of the Metro. The first stations were opened in 1995 and 25 years later on 25 October 2008, the first line of Warsaw Metro was completed with the opening of the three final stations (Stare Bielany, Wawrzyszew and Młociny). Therefore, over the 25 years, 21 stations as well as the technical and holding station STP Kabaty were built. Mostostal Warsaw carried out the complete interior design and furnishing at stations A1 (Kabaty) to A13 (Centrum), station A22 (Wawrzyszew) and station A21 (Stare Bielany) and A20 (Słodowiec) together with connecting tunnels. 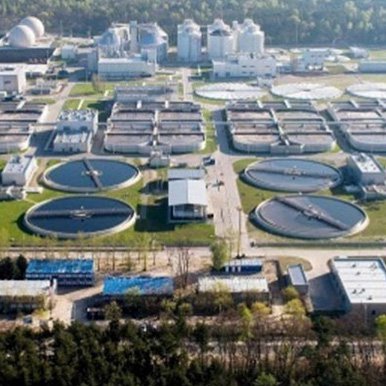 Thethen largest wastewater treatment plant in Poland. Its capacity was around 400 million m3 /24h and it serviced the entire right bank of Warsaw. 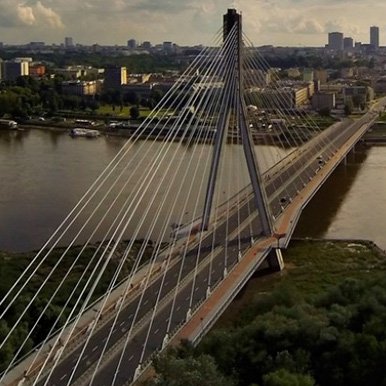 The first suspension bridge in Poland was opened on 6 October 2000 connecting the Powiśle district with Praga Północ in the vicinity of Port Praski. The bridge with the flyover is 479 meters long, it has two lanes each way for vehicles and two lanes for pedestrians and cyclists. The cable-stayed construction is supported by a 90-metre-long pylon to which 48 cables are attached supporting the deck. The pylon is placed on the right bank of Vistula river, and on the left side it is supported by two bearings embedded on the bottom of the river. A maintenance lift is located inside the northern part of pylon. From the optical point of view, the bridge seems to be light (lack of classic pillars); however, it consists of seven spans together with the access flyovers. 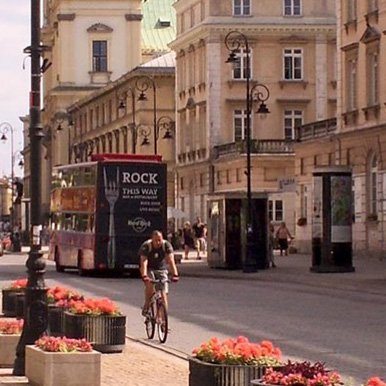 On 21 June 2006 on Plac Piłsudski in Warsaw, a ceremony took place for the signing of a contract with the Capital City of Warsaw represented by the Municipal Roads Administration (Zarząd Dróg Miejskich) for the “Modernisation of the road surface for Krakowskie Przedmieście Street in Warsaw at the section from Świętokrzyska Street to Royal Castle Square.” The Polish president Lech Kaczyński took part in the contract signing ceremony. The roadway of Krakowskie Przedmieście was narrowed to two lanes and the pavements were broadened. The roadway was covered with granite brick-stone and the pavement with granite tiles. 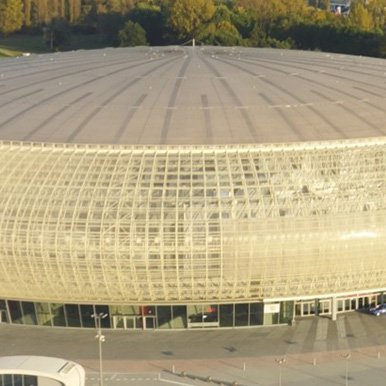 Hall located on aleja Pokoju Street and Stanisława Lema Street in Cracow is modern entertainment and sports facility which meets all international standards. Moreover, it is worth mentioning that it is the bigest venue of its kind in Poland.

Hall seating capacity varies depending on the set-up of the event from 11 554 to aproximately 18 000 seats (seating capacity averages 15 328 of people for typical event as volleyball match) which is positioning it on the first place among this type of facilities. At the disposal of the guests are available 1341 parking spots, 27 sky boxes and president lodge. Construction of the facility started in May 2011 and finished in April 2014. The opening ceremony took place at the end of May 2014. The scope of the investment covered, apart from main hall, construction of training hall and two-level underground garage with internal installations and construction of access roads, surface parking lots, squares and pedestrian passages. The hall was, among others, one of the sporting arenas of Volleyball World Championship 2014 which were organized in Poland. Tauron Arena Kraków gained the first place in a prestigious contest titled: Construction of the Year 2014 in the category Sports facilities. 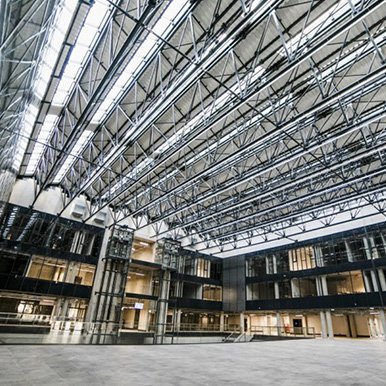 WE BUILD THE FUTURE. RESPONSIBLY

Mostostal Warszawa SA is one of the largest construction companies in Poland; acting as the general contractor, it carries out investments in all key sectors of the construction market in Poland and abroad. The company has been operating in Poland for over 75 years and this has borne fruit in the form of the implementation of all types of construction facilities: general, industrial, environmental, energy, infrastructural and road. In the course of its history, the company has acquired significant experience in developing steel structures and technological installations for the petrochemical and chemical industries. The company combines the long-term tradition of Polish engineering with the use of state-of-the-art technologies. Mostostal Warszawa has been listed on the Warsaw Stock Exchange almost since the very beginning of the domestic capital market. The major shareholder in the company is Acciona Construcción SA, a Spanish company of Group Acciona which operates in more than 40 countries around the world in the infrastructure, renewable energy, clean technology and water management sectors. Mostostal Warszawa SA is the main shareholder in several companies making up the Mostostal Warszawa Capital Group.